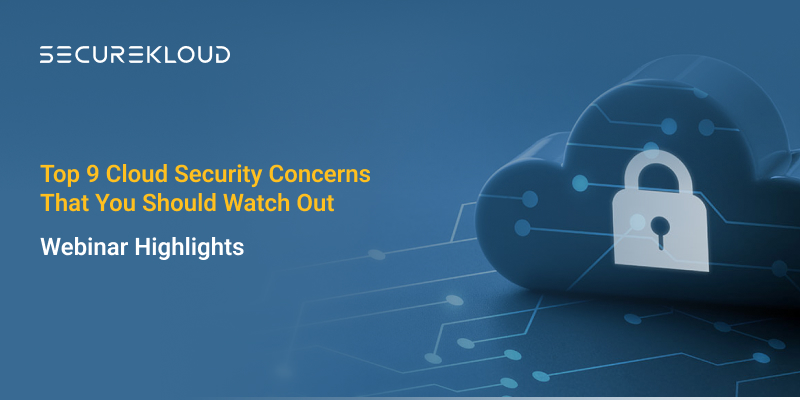 The new advancements in technology like the IoT, Blockchain and many others have expanded the horizons of the IT industry, especially in cloud space.

As we are heading towards a post-pandemic era, companies and entrepreneurs have become more tech-savvy and they are trying to adopt innovative technologies that make their work easier. And of course, cloud adoption has a major role to play.

Lots of companies have adopted Cloud Computing but the real question is- Are we secure?

Definitely not, and cloud security threats will continue to escalate if you overlook it.

As the industry thought leader with 25+ years of expertise in the IT space, Raj Srinivasaraghavan has immensely contributed towards addressing factors relating to cloud space and key customer security. In this blog, we bring to you the nine major cloud security concerns that Raj Srinivasaraghavan shared with us at our webinar.

Save Your Business from These 9 Cloud Security Threats

1. Vulnerability due to misconfigurations of cloud security settings

According to a recent study, misconfigurations were found to be the cause of 95% of cloud security vulnerabilities. It can be caused due to simple reasons and can happen at various levels. Misconfigurations can occur at the infrastructure level with security groups or with Network Access Control List (NACL).

Chances are also high that it might occur at the application level. For instance, misconfiguration occurs when an application is deployed at the Kubernetes level and a key is exposed in the etcd file. It could also happen if an IAM user has a lot of privileges. So, there might be a lot of keys that could be exposed, raising serious cloud security risks.

Because many enterprises with multi-cloud deployments are not so familiar with protecting their cloud infrastructure using the right tactics, a misconfiguration or safety negligence can easily expose the cloud-based resources to attackers.

2. Lack of organic security (DevSecOps) as part of application development

“With DevSecOps, what happens is there is a lot of flexibility that you don’t have to test for security or address security later.” – Raj Srinivasaraghavan, CTO, SecureKloud Technologies

3. Authorization as a result of non-zero security permissions

One of the most important aspects of cloud to look into is the non-zero security permissions. In this situation, you trust the user and give all the permissions to the user as you are confident that he/she will use them only in the best interest of the company. But what if that user’s account gets hacked? Obviously, you wouldn’t be prepared for this particular data breach. The hacker will get access to important critical systems and all data, including ones with confidential information.

4. Security threats due to the lack of cloud-native security tools

Security threats can arise due to the lack of cloud-native security tools. In recent years, cloud has moved from standard web application development to container-based deployment.

As Raj Srinivasaraghavan puts it, “By 2023, about 80% of the enterprises will have at least two container-based production applications in any cloud. Right now, it stands at 15% and it will take a phenomenal jump in the next three years.”

So, you need cloud-native security tools to monitor those microservices and APIs to make sure they are secure and no unauthorized user can access confidential data. Deployment of the clusters should be another key area to be monitored, especially with the proxies accessing them.

5. Risks associated with multiple identities from other enterprises accessing data

There are a lot of risks associated with multiple identities, which can be formed in an enterprise in different ways. For instance, it can be your own users or users from another enterprise through a federation or a Single Sign-On (SSO) process. It could also be your own users accessing from an active directory or a shared directory location.

This issue should be brought under control as they can gain easy access to enterprise data and applications in systems. So, users have to be controlled in such a way that somebody cannot piggyback into their identity and cause havoc in the system. You should pay attention to this security factor irrespective of your cloud environment whether you operate on a private cloud or a public cloud. 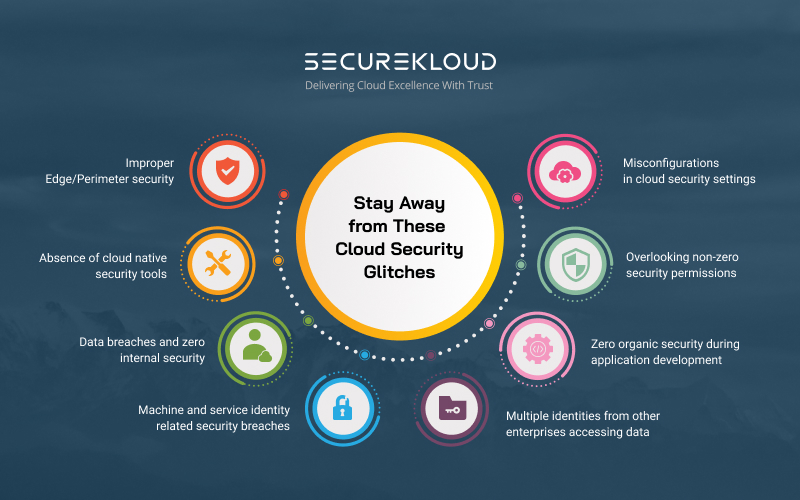 Threats come not just from external sources but from internally as well. Hence, it’s critical to secure your systems from internal threats. It can be unintentional in some cases as people might leave the backdoor open and some processes might be running without any security certificates. Another user can plug in and gain backdoor entry into the systems.

On the other hand, there could also be real conscious attempts internally where an insider can exploit your system to damage or steal data. But whether it is intentional or accidental, these insider threats can lead to a data breach, system downtime, and data loss, all indirectly leading to reduced customer confidence.

These security breaches happen when anyone is able to get to the service part that is exposed, whether it’s a service layer or the machine layer. These are the most important parts for any enterprise. You wouldn’t want these layers to be hacked, especially at a time when most of the enterprise architecture is moving towards the services part.

8. Compromise of enterprise networks due to improper Edge/Perimeter security

“Edge security might look new to you, but it has really picked up a lot in the last couple of years, especially in 2021.” – Raj Srinivasaraghavan

There are various reasons why Edge/Perimeter security has gained momentum. The primary factor is the advent of new technologies like IoT and Blockchain. When you have edges that need to be a part of the networks, decentralization is the best way to optimize Edge and Perimeter security.

Edge security ensures the security of the corporate resources that are not located within a centralized datacenter. Thus, it will secure the users and apps that function at the edge of your company’s network.

Closely connected to Edge security is the security of the devices that are going to be plugged into these Edge locations, such as your IoT device, laptop, desktop, mobile device, and so on. Even the mobile device can cause problems if it is not properly controlled, especially when it comes to its access control.

These are some of the major threats that you need to be watchful of in the coming years. As you have now read through the major cloud security threats, now is the time to learn about how to rise above these threats. Explore what Raj Srinivasaraghavan had to share about the Cloud Security and Compliance trends you need to follow in 2022.

You can check out the entire webinar video here.

In our 10+ years of journey as the industry leading Cloud Managed Service provider, we have witnessed the immense growth and acceptance of Cloud infrastructure, ever proud to have strengthened our forte in the cloud space. The certified Cloud professionals at SecureKloud ensure Cloud security and compliance to help you thrive in your business without any security breaches.

Our expertise in cloud has given way to 400+ satisfied customers in our Cloud portfolio. With our diligent team of cloud experts, we have been consistently providing end-to-end Cloud Managed Services for various industries, including F500 companies.

In case of any cloud requirements, we are always here to help you out.